You may indeed consider me presumptuous in thus taking this liberty of imposing upon you ; but my heart is so full in the love and admiration of one whose impartial light of wisdom has not been darkened by the cloud of ignorant prejudism which overshadows mankind and costs a glown upon fair and equivocal justice.

In the name of truth, love and purity, I thank you for the efforts you are making to cause the light of love and justice to be spread forth and prevail against that of prejudism, enmity, ignorance and intrigue. In the name of my fellow brothers which, although, being of jewish descent [mots illisibles][1] no creed or [mot illisible][2] but simply be trodden down.

In the worlds history we find abundant proofs of the cruelty of the persecutions of one creed against another ; by what name we [mot illisible] these, by what of ignorant barbarians ; and is this persecut in any differents is it less cruel or fierce ? How we approach [mot illisible] to that of a mere beast with only that instinct of selfishness and passion, when we give [mot illisible] undo our enmity in the realicisms persecution of our fellow brothers.

Again asking that you pardon my liberty and that you give indulgence to that which the feelings instigated and thanking you for your love and liberality, I will [mot illisible] praying that the light of truth and wisdom may dispel that cloud of prejudism that is overshadowing mankind, and that all mankind inth that love which is our supreme Father inate and excepted by all man ; but alas, how few are there who perceiving follow this law of god.

It has been claimed and is still propagated that the Jew is unscrupulous and is therefore the persecuted ; but, Oh that some of these instigators of crime and prejudism would but come in closer affinity with the jew, if instead of uviling and calumning (sic) him he would extend into him his love and humanity he would then find the jew a character entire by different from what he has been painted.

The Jew at present is in a worse state of slavery than the [mot illisible][3] formerly was.

Those who are so devout and devoted to religion and even style themselves liberal philantrophists how do they bring up this child into [mot illisible] upon the jew, as one who is to be shummed and when [mot illisible] to he who guides and controls the actions of man may give you the just recompense that your martyrdom deserves.

Hoping that the great wrong may be righted I am. 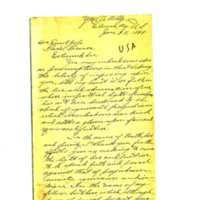 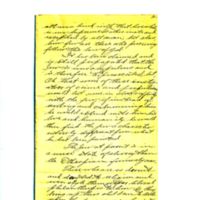 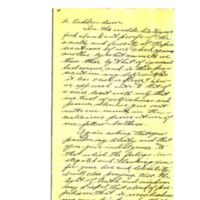 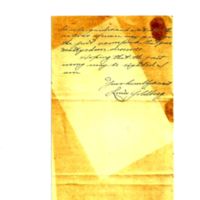