I take the liberty to address these lines to you with the hope that through your fame and influence they may find insertion into some leading newspaper either in England, Belgium or France. The herein told story seems incredible to most people, but I fear is of every day occurrence here, as, whenever I subit it to a lawyer, a cynical gratified smile everspreads his face. That the thing is true is likewise insured, as nobody's fancy could possibly hatcj out inch an outrage.

Also as I was liberated out of the madhouse by the german ministry of the exterior, to which my sister in Germany, as guardian of my children appealed in my behalf, he threatened the Governor Hvlcomb to sue the state of Nebraska for $200,000 for putting me in penitentiary as false commitment, as in madhouse I was legally dead, the whole thing must be true in every particular. When this superintendent Mackay got the letter from the consulgeneral in Chicago, who received it from the embassy in Washington he came, while I and about twenty others, likewise incarcerated, mere amusing ourselves and laughingly remarked. “I got a letter from the Consul gen in Chicago about you,Your family seems to interest themselves about you, but he cannot help you. You are an american citizen ha ha”. Now follows copy of a letter written to the legislature of Nebraska containing source of trouble.

For the presiding officer of the Senate

If You are an honest man, you will present this memorial to the Senate without delay.

In the year 1888 I was dispossessed by sheriff Borwn of Dixon county Nebr. Of landed property, the S. W. ¼ of [mot illisible] 11 t. 29 5 east Niobrara series, now O'Neill Nebr. This was done on a judgement without juridiction, by justice Hewitt of Fanca on my appeal, judge I Powers jun, upheld this judgement and Norris sitting jointly with him as a disbr judge, wrote the “forthwith yectment”. All these here named scoundrels knowing Sully well the sacrality thus committed. Both Barnes, of Fanca & Norfolk also George Mattison stand self committed as forgers on the petition to court sayint that Mattison was seized in Lee simple “while he had not a valid entry. Judgment of Hewitt April 27th 1888 of Parrers, July 11th 1889, eviction by Norris Aug. 2nd 1889. After commiting all this barratry it became a necessity to make me flee the country, and leave them in possession of they robbery undispented.

On the first eviction sheriff Brown had an omana of the Barnes and Mattison, to put a revolver on my forehead, using insulting language, also he handcuffed me with new handcuffs, yet in the tissupaper of the store, presented by Bankwrecker Dorsey for this occasion, for ¾ of an hour around a tree, for their diversion, that whole plan concocted in a saloon in Ponca admist drunken bebanchery. The ounty attorneis (sic), then and afterwards in office J. J. Me Barty and his pupil in law, mendicity of perjury, Pearson. See these knew the whole disgraceful scandal as also did the otty gen. Lease Hastings, Churchill and Smythe also their Governors Thayer, Boyd, Crounse and Holcomb.

As sance for the goose also suits the gander, I thought to imitate the revolvertrick as no harm could [mot illisible] from such diversion, even while acting as robbers, as Brown and Mattison did.

I pulled a revolver on S. S. Me Carthy in the sheriffs office in Ponca was arrested to frighten me, put in steelcage in Ponca in defanet of enormous bail, an the indictement, in itselfs a howling humbug,  [mot illisible] atttempt to shoot the revolver empty and uunserviceable. Never an attempt to shoot ne [mot illisible], not in any code penal exists such an outrage on common sense.

After being in steelcahe seven months, twenty days, court sitting meanwhile, I ready a farce was held, Norris, the [mot illsible] raseal presiding while S. S. Me Carthy acted simultaneously as a chiefwitness and public prosecutor yet secunded by Mel. C. Lay, while Barnes, the forger was forced on me against my protest by the corrupt court Norris.

I was declared “guilty of sanity” as Norris charged the jury, “if sane, guilty if insane not guilty”. Either penitentiary or madhouse. The jury saw that I was sane in mind and body as I myself emphatically said, but my long imprisonment had cost the county, th be square with the ignorant, they sent me two years to penitentiary, but gave me all chance to escape on the way. I was two years in pen. When I cam out, I swore out criminal complaints against Me. Carthy, M. Cabe sheriff & deal constable, conspiracy to perpure,subornation to perjury, also against et E. Barnes, exdisfr judge John Barnes & Gev Mattison, for forgery of legal document, standing [mot illisible] dead and recorded in Court Docket in Ponca.

The combined courthouse sing prevailed on Asa Bose Probatyndge, before complaints were sworn and tool of Me Carhy to swear that he was afraid of me that of might possibly run a knife into his ribs. On this silly, infantile, crazy declaration I was arrested on unlegal warrant of Court Clerk Harris by sherrif Me Cabe's deputy Me. Manus with revolverin Hand, Me Carty in the lunatic commission, then Me Carthy was, by Norris replaced by Pearson and he by Nodgers. Of course that commission did what was expected, found me insane. In the asylum in Norfolk I was employed as physician my prescription are on file cannot be denied, administred to attendants and patients, male & female. I was liberated on the threat of the Consul Gen of Germany in Chicago that he must sue the state of Nebraska for $200,000 for putting me in pen. On known fulse commitment. If a man has been treated by an organized band of legal thieves, it become imperatively necessary to have everyone on the justices of the peace and the distr. Judge on their side deny him all justice. Distr, Judge Evans refused me a mandamus to compell the justices Geffreys of Martins burg as Hart of Allen to do their sworn duty.

The federal courts also refused to act, saying “that they had no jurisdiction”. The State has been put to considerable expense. The county of Dixon to over $1800, by their judicial anarchy.

Besides it has ruined me financially, has destroyed my hearing, my standing in the community, also has branded my children as the offspring of a penitentiary bird. Really the Dreyfus scandal is not in it by far.

An insertion of his as specified will you must help me, as I am poor and an old man of sixty seven years.

My best thanks in advance.

Believe me, Sir, to remain

This letter was sent to England but by the inconveivable stupidity of the english mail held there in the general delivery and returned. Such is fame, caviar to the general.

Inclosed find a slip of a paper which, knowing my case, knowing me for 37 years, can in holy horror utter this, when every one knows, that such things happen here more often than anywhere. Of course all is true here given, nobody can invent such a plot. My boys branded as the offspring of a criminal will thank for giving this to the [mot illisilbe]. Very truly & at C. Ruttgers 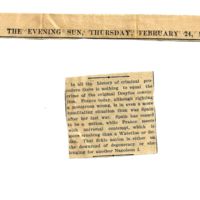 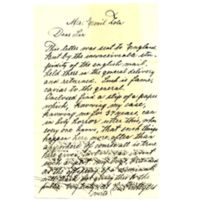 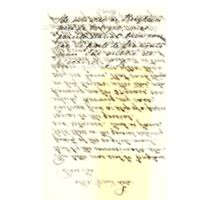 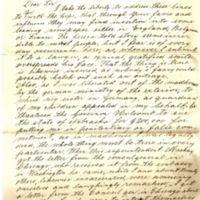 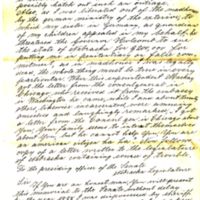 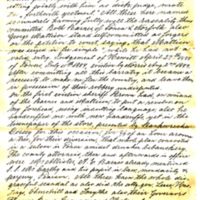 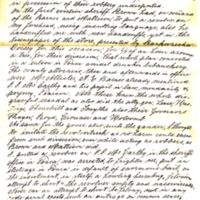 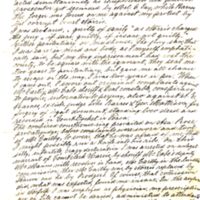 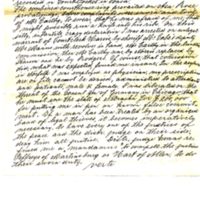 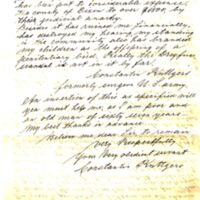