Esteemed Sir,
I beg to envlose copy of editorial published in the last souvenir of the above society which explains the object of our existence.
I know sir that such a noble charity as ours that rescues helpless babes from surroundings that would dwarf their minds and disease their little bodies, and rears them in a pure beautiful atmosphere must appeal to every heart particularly to one like your own through which shines Charity and Justice, for to you sir the whole Hebrew race owe a debt of gratitude, which will not soon be forgotten.
Each year our League tenders the entire receipts of a large Entertainment and Reception to our mother institution and our Souvenir contributes largely to our success. This contains besides other interesting reading matter, a number of letters written in autograph from the most prominent people in the literary and charitable world. As these letters endorse and commend our work and are reproduced in fac-simile same as [prénom illisible] Wallace of which I enclose copy you can readily understand how greatly they enhance the value of the souvenir. Can I Sir, in the name of our charity, ask you to contribute such a letter ? Believe me, no matter how brief it may be, it will be thoroughly appreciated.
Already I have received kind replies from Mon. Jules Verne or May Nordeen Host Bailey Aldrick J. Marion Crawford, Donald J Mitetiell Right Rev Fred M. Farrar Canon of Westminster. Mrs Elea Colueler Welcox Mary Ewilkins Elizabeth Stuart Phelps and a number of atterns of equal prominence.
The urgent need of such Institution as ours was well illustrated by the recent report of our State Charities Association which showed the appalling death rate of ninety seven per cent amongst the infants cared for by the state authorities. The point with great pride therefore to the record of the Hebrew Infant Asylum for the same period _ one year which shows a death rate of five per cent surely this is the best proof of the excellent management that characterizes the Institution.
I trust Sir you will not consider my request presumptive best will favor me with a reply at your convenience.
Accept sir the assurance of my most profound respect and I know I re echo the sentiment of the whole Hebrew vase when I say “God bless your” for the noble stand you have taken to uphold Justice and truth through your intervention for one of our vase. Believe me.
Your obedient Servant,
Jules Hart,
173 St Nicholas Ave
Near 119 st NY city
USA 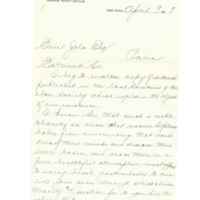 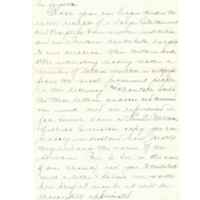 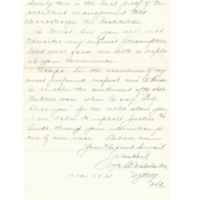