Paris France.
Dear Sir :
Herewith I have the honor to transmit to you, a letter of thanks adopted at the meeting of a committee of the KURNIK BENEVOLENT ASSOCIATION, held on July the fourth, the day so dear to every lover of liberty, equality, justice, and the rights of the people, as exemplified by our constitution and laws.
Very respectfully yours,
Signature : L. Dalroy
Honorary Secretary.
22 W. 130th Street.
New York, N. Y.

In common with the citizens of our beloved country, the members of the KURNIK BENEVOLENT ASSOCIATION, recognizing the signal services to the cause of justice which you have rendered by your fearless and intrepid proclamation of the true state of facts in the Dreyfus case, have appointed the undersigned comittee to extend to you on behalf of our Association, our sincere thanks for your noble and unselfish conduct ; and to express to you our unbounded admiration for your courage and self-sacrifice in championing the cause of the prisoner on Devil's Island, when such championship meant the arraying against yourself of the almost united people of your country. It is due to your stand in this matter, that justice has triumphed over avarice, and cupidity, and dishonesty. We trust that the ultimate outvome of it all may be a firmer establishment of our sister republic across the Atlantic ; with which we, notwithstanding all their faults, deeply and sincerely sympathize with ; and also which we trust will, together. With our own belvoed and gloriously free country, be, the means of placing the entire human race on a freer and more liberal position.
We beg of you to accept the thanks and the assurance that we will ever pray that He, who is the ruler of all countries, will bless you and yours, and grant you long life, health, and happiness. 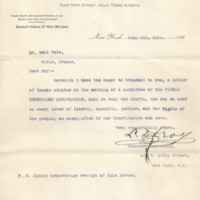 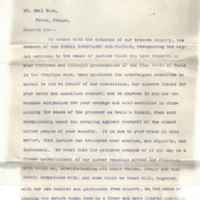 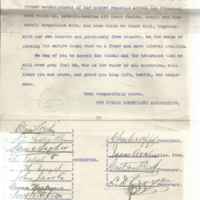