Dear Sir:
The people of this free country have been profoundly interested in the case of Captain Alfred Dreyfus, and we have been watching the press reports during the hearing before the Court of Cassation with the deepest interest. We were also deeply impressed with your efforts in his behalf. The people of this country have believed in the innocence of Captain Dreyfus, and that he was condemned without proper evidence and without a fair trial.
It would be valuable contribution to the literature of the world as well as to its history to have an account of Captain Dreyfus' former trial, written by himself, and of the years he spent at Devil's Island, as well as the account of his second trial with his triumphant acquittal which we believe he will have. We have to-day written him, making a proposition to write his memoirs for us to publish. The sale would be large in this country. As your name has been so intimately connected with Captain Dreyfus", we write to ask if you would not write the Introduction to his memoirs, in case he accepts our proposition, which we trust he will do. He will probably consult you in regard to the matter.
We are the oldest publishers of books by subscription in this country, and have unsurpassed facilities for the sale of the work. The sale of some of our large publications have reached as high as 400,000 copies. One of the most vluable book we have ever issued was "Twenty Years of Congress", by Hon James G. Blaine, and we also published a second book by Mr Blaine, entitled "Political Discussions", and also his authorized "Biography", by Gail Hamilton.
We should want to have the book thoroughly illustrated and would like to have your photograph, and any other photographs you may know of which would be appropriate to illustrate this book.
With regard to the length of the Introduction, we would not limit you, but would suggest that perhaps you could write in from 3 to 5000 words what would be satisfactory to you, but we would leave that to your judgment. As to the renumeration for it, we would make that entirely satisfactory to you.
Would you kindly consult with Captain Dreyfus on his arrival in France on this matter, so we may know at the earliest possible date his decision in regard to it, and make our plans accordingly.
We notice by the press that you propose to write a novel when the Dreyfus case is through, based on this whole affair. We would like to publish that for you in this country, and believe we can do it justice. Your novel could be sold in connection with Captain Dreyfus' memoirs. They would be companion volumes.
We need not to say you that our interest and sympathy will be with Captain Dreyfus fully, in his coming trial, when we believe he will be gloriously vindicated as an innocent man.
Awaiting your reply, we remain,
Yours with the highest esteem,
Signature : Chas. C. Haskell & Son. 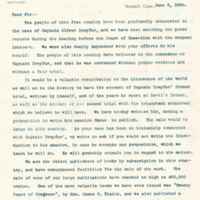 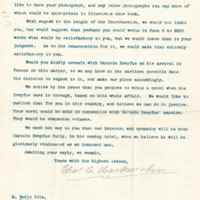