Mons : Emile Zola.
Dear Sir !
You must kindly excuse me if I take up some of your valuable time, but I feel that I must write this to you, please give me your attention. What I am about to write I have written to some Gentlemen in France indeed for more than 9 years I wrote about it but none ever answered me, several times I wrote to Mons. Mereveer when he was in office also wrote to Mons. Zurlindur but Minister of War as of Justice never answered and now I will write it all to you. First I must give you some of my family History. My Grandfather was Count Johan Bitseh of France before revolution time, maybe you know about his conduct, 18 years ago. I married in this Country one Carl Druhm 9 years ago. I have to take a Divorce from him because he commited adultery, it was the same in Carlsbad, Austria where we lived from 1889 for 4 years reference about his conduct there may be obtained from heren Pastor Rodenwahl and reference of his conduct in Oakland. Cal. From his Honor Judge F. B. Ogden. Now I must say that my Husband father Carl Druhm sen always hated me because of my Grandfather. I could never see what Mr Druhm sen hated my Grandfather for as I alwais (sic) thought he was a German born and lived in Berlin Germany and Died there lately. But I know now.
My father in law offered my husband a large sum of money to treat me in the meanest way possible what the hole(sic) family did and I could see no other way out of it but to ask for a Divorce. I have one daughter living 17 years old. 3 of my children died, and now I will write down again what I have so often written to France, and whatever you think of it, believe me, it is true. When I was in the greatest trouble and did not know how to acount (sic) for it, there came to me the spirit of M. (sic) Antoinette of France. _ not out of a closet _ but natural and I was not afraid at all. The spirit said
“The Dauphin of France did not die in Prisson (sic). The Dr. put a corpse in his place and took the boy out. And Carl Druhm sen : is the son of the Dauphin. Now Here I will say that Mr Druhm sen : allwais (sic) said there is some secret about his father but myself and his wife would not believe so and it made him usualy (sic) mad, once he stamped in way on a letter to us as seal, but I did not know what it meant. Some time ago I asked an artist in San Francisco and he said it used to be the Dauphins. I showed it to the Frensh (sic) Consul and he advised me to write home about it the stamp of this seal is still at the house in Berlin. G. Lovufof Strapse N°2. There are other tings (sic) the Spirit said. They are there is no holy ghost. But whene (sic) the Angel Spoke to Maria about the conception of Christ, he called God Father The Holy Spirit. Also the Spirit said, there is a mistake about the motive of crown primal Rudolf suicide. It was the conduct of his wife. She and her confessor did not allwais (sic) pray after a pause the spirit said. He did not want to make her confess she hade (sic) her title. She was a adultress and the lady that died with him was inocent (sic). Rudolph made her swear not to tell anybody what he was about to say to her and after she know (sic) she refused to let him go alone and now there is something (sic) else. The spirit said The spirit can do without the Pape. I was surprised at this and said thoughtless could you tell a person wath (sic) he is for. She looked at me angry and said loud. No I ca-ant(sic) some other tings (sic) she said of some persons. I have looked into and I formed that although horrible they ar (sic) true. When first I wrote this to France I asked to restore through my Girl the Flag of M. Antoinette & Louis but I have now given up all her about it. I am only writing this to you to show how the Republicans honor the will of God who has made Kings.
Dear Sir I now beg to ask you a favor. Of course my husband an his family wanted to take from me the child but the law would not give it to them and I have ever since supported her _ poorly but anyhow. Now whene (sic) I was in Berlin, my Father in Law made me a present of a valuable pin, it is called Italian Pearl.
The information to produce them was lost in the 14th Century and I am told it is worth some money.
I want to sell it and go into some business in a smal (sic) way so as to earn a living. It is a fancy with me to have some one in France buy it, it would make me feel as if the past on my Grandfathers side forgotten and forgiven. I know nobody there and I am asking you do you know of some Gentleman or Lady that would buy the Pin it could be put on exhibition or changed to be worn in some other way, and will you be so kind to answer me though I am a stranger to you and you will do a real good Ting (sic).
My address is
Mrs Louisa Druhm
P. O. General Delivery
San Francisco
California
U. S. A. 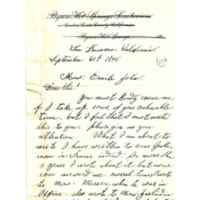 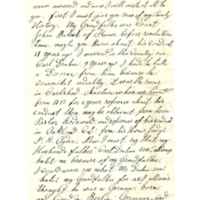 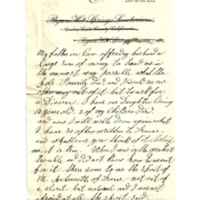 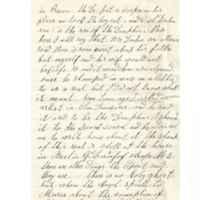 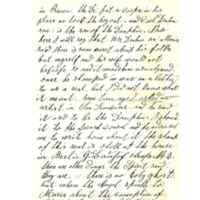 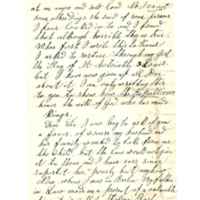 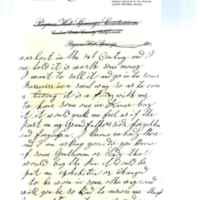 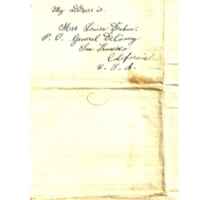