Hoping you will pardon this intrusion, 2 wish to request that you inscrcibe your autograph on the enclosed card and return to me.
I have an excellent collection, including most of the famous men of the present and past century, but could not consider it complete without yours, which I hope you will not refuse me.
I know that you have more quests similar to this one, than you can comply with, but when you consider how much importance I attach to it and how far I am sending for it, I am almost sure you will not refuse me. It will only take a moment of your time and will be more highly prized than anyone I have, even the President of this country and of France, Mexico and Queen Victoria, whose I received some three years ago, and which I prize very highly.
I will not take your time to comment on your recent affair in France, only to say that I join the million of Americans in upholding your noble an fearless stand, which you took in behalf of a greatly wronged and innocent man, and whom we expect to soon see cleared of the horrible crime of which he is charged.
Before I close I wish to once more quest that you will not overlook this letter and that I may soon number your autograph in my collection, which was the pride of my Grandfather, who left it to me twelve years ago.
Wishing you health, wealth and success, I am, Most Respectfully an American Friend,
William E. Pruoq,
Chillicothe Mo,
U. S. A. 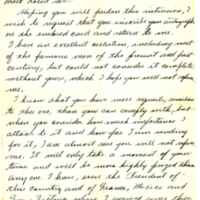 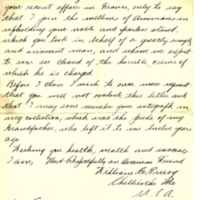