Dear sir ;
I have appreciated your noble atend in behalf of the innocence of Capt. Dreyfus and was glad to see that your highest court has asserted the righteousness of your cause against so much predjudice and wicked opposition.
I have followed the Dreyfus matter almost from its beginning, but our news paper reports here are of necessity brief and unsatisfactory, so that I have only a confused notion of how so much injustice could have [been] done in this enlightened age to an innocent man. If it is not asking too much I should be very much obliged if you would write me where a full and detailed narative of Capt. Dreyfus' case and including you cases can be obtained. Have you written any book on the subject ?
Assuring you of my profoundest sentiments of respect, I beg to remain, sir, 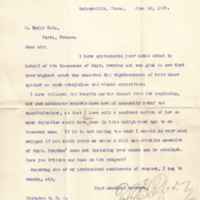